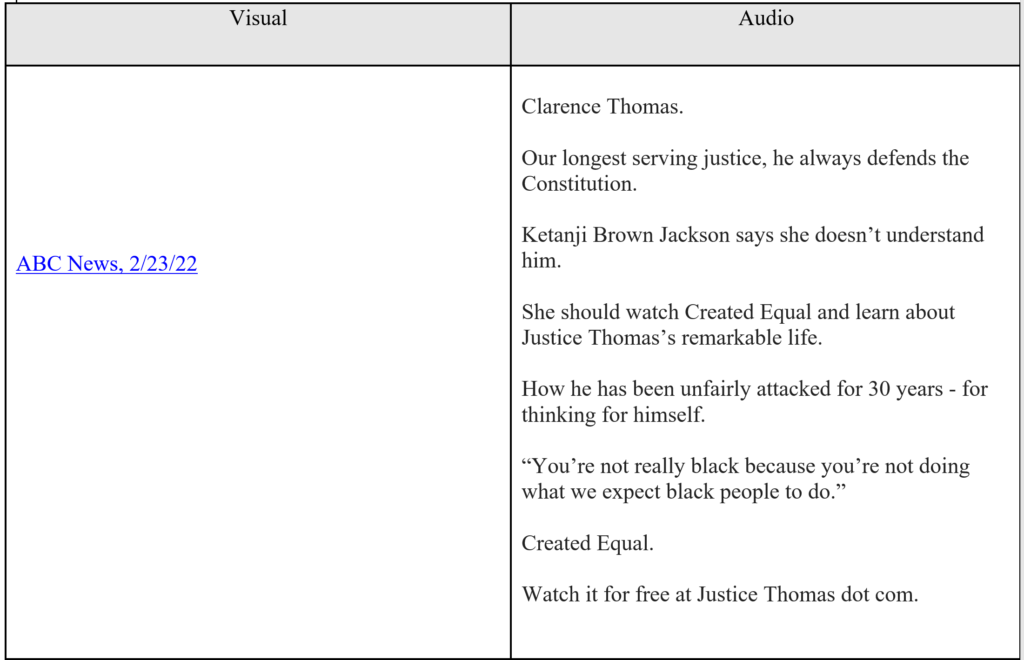 The ad highlights Created Equal, a documentary that tells the story of Thomas’s remarkable life in his own words.  JCN’s ad encourages Judge Jackson and viewers to watch the film and learn more about the ways Thomas has been unfairly attacked for 30 years. The ad, “Misunderstood,” will air nationally and in Washington, D.C. on cable TV and digitally starting March 23, 2022.

Statement from JCN President Carrie Severino:
“For more than thirty years the Left has targeted Justice Thomas because he thinks for himself.  Now that he is the Court’s leading intellectual voice, he is in the Left’s crosshairs more than ever as they wage a war to intimidate and undermine him.  Everyone should watch Created Equal so that they can see who the real Justice Thomas is, rather than just the Left’s nasty caricature.”

Background:
Justice Thomas’ Decades-Long Record of Defending the Constitution and Shaping Legal Thinking In The U.S.

For 30 years Justice Clarence Thomas has tirelessly defended the Constitution in the face of vile and baseless attacks from the left.

In The Enigma of Clarence Thomas (2019), Corey Robin wrote that “Thomas sees something of value in the social worlds of slavery and Jim Crow that justifies a recurrence to that Constitution . . . .”