WASHINGTON – The Judicial Crisis Network is launching a week-long, more than $350K television and digital ad campaign thanking President Trump and Senate Majority Leader Mitch McConnell (R-KY) for their work on appointing and confirming exceedingly well-qualified judges.  There will be two ads – one thanking President Trump and one thanking Senator McConnell. They will air on Sunday morning, January 7th on the network public affairs shows in the D.C. metro area, and will continue through the rest of the week running on Fox News morning and primetime shows, as well as MSNBC’s Morning Joe. Appointing and confirming well-qualified judicial nominees to the federal bench has been one of the biggest successes to date for both the Trump Administration and the U.S. Senate. The Judicial Crisis Network applauds both President Trump and Senator McConnell for their leadership and commitment to leaving a legacy of excellent judges who will apply the law fairly.
Ad thanking President Trump: https://youtu.be/qf83EP40VYw
Ad thanking Senator McConnell: https://youtu.be/6v3o1doC70Y
Statement from Judicial Crisis Network’s Chief Counsel and Policy Director, Carrie Severino:
“One of the greatest and most lasting successes of President Trump’s first year was appointing a record number of highly-qualified judicial nominees. President Trump is keeping his campaign promise to fill the federal bench with brilliant judges who follow the Constitution, and thanks to the strong leadership of Senate Majority Leader Mitch McConnell they are being confirmed by the Senate. Thank you, President Trump and Senator McConnell for your important work on confirming outstanding judicial nominees, and we look forward to more judicial confirmations in 2018.”
Scripts below: 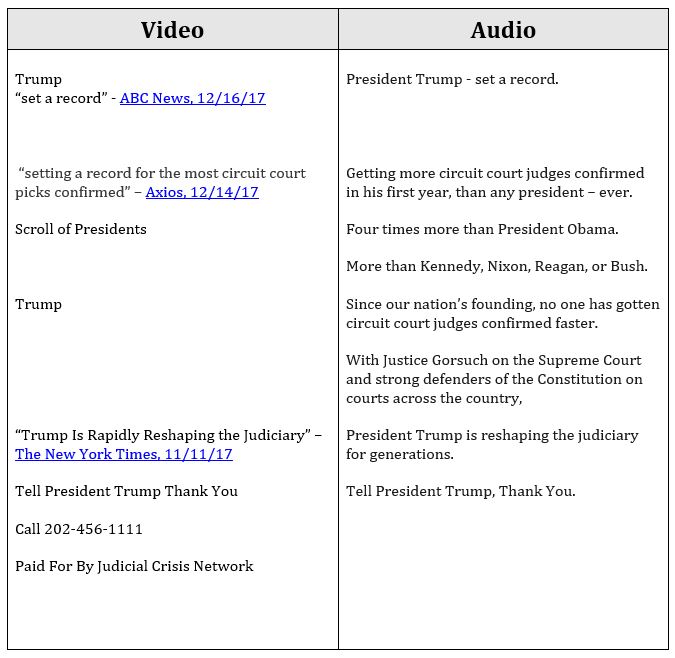 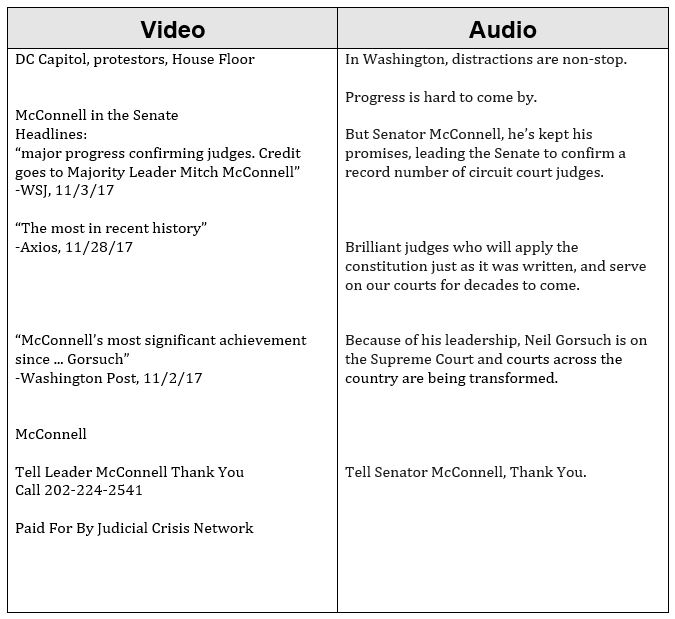